FIFTY years ago the sport of drag racing was still a fairly new concept beloved by kids all over the USA. So when Hollywood came to put its own take on quarter-mile culture, it might strike many as strange that it wasn’t a hard-edged cop drama or action show but a sit-com about a family of monsters or, more accurately, Munsters.

The 1965 episode of The Munsters titled “Hot Rod Herman” saw plenty of race action for the Munsters’ legendary “Munsters’ Koach” as family patriarch Herman loses it in a race for pink slips. Grandpa Munster takes over and builds his own drag car to win the Koach back, which he does in style.

As with the Koach, the original DRAG-U-LA was designed by Tom Daniel and built at George Barris’s famous shop, with Richard “Korky” Korkes actually credited with doing most of the work. Both the Munsters Koach and DRAG-U-LA have gone on to become two of the most iconic hot rods of all time thanks to the enduring popularity of The Munsters. They certainly struck a chord with Queensland’s David Scott, who just about stole the show at Meguiar’s MotorEx Sydney in 2015 when he debuted this incredible machine to an awestruck crowd and an amazed George Barris.

Apart from the twin carbs and zoomies, the 350 small-block Chev V8 has a mild cam, MSD HEI ignition and a Mr Gasket sump

“I always wanted a TV or movie car when growing up and I decided I wanted to have one that nobody else in Australia had built yet,” said David. What he’s ended up with is a recreation of the original DRAG-U-LA that was good enough to score the legendary George Barris’s personal pick for his favourite hot rod at MotorEx, and you can’t get much higher praise than that!

The only brakes are the drums hiding inside the 15x8in Radir rear wheels wearing vintage-style drag slicks. Oh yes, there’s also a custom parachute mounted out back between the rear lamps (which are actually vintage-look patio lamps fitted with red tinted lenses). One of the reasons Barris’s numerous TV cars were so loved was because they weren’t just props, they were real hot rods that actually drove! In fact the original DRAG-U-LA pulled a genuine wheelstand in one of the episodes.

A highly impressed George Barris literally gave David’s tribute his signature of approval when the King of Kustoms saw it at Meguiar’s MotorEx Sydney, 2015

Rather than the 289ci Ford V8 utilised by Korky, David sourced a crate 350 Chev from Rocket Industries

House Of Kolor combined UK12 Pagan Gold Kandy over a base of BC12 Zenith Gold to take DRAG-U-LA’s original gold colour scheme to the next level.

For reasons unknown, it was illegal in 1965 to purchase a coffin without a death certificate. Korky had to pay a Hollywood funeral home cash to “accidentally leave it beside the back door” when they went home for the night. This genuine coffin was duly chopped up to make the original DRAG-U-LA’s bodywork, which was then topped off with that crazy custom Perspex bubble top that was all the rage for wild, mid-60s customs and show rods.

To recreate the look, David scored a pair of 18-gauge steel coffins, which he shortened and widened to get the proportions just right. They were decorated with resin trimming and real coffin handles before Josh Carono of Swains Motor Body Repairs laid down that eye-searing House of Kolor Pagan Gold.

Hinged off a Jegs pick-up tailgate actuator, David sourced the Perspex bubble top from the legendary South End Kustoms hot rod shop in Hemet, California. That’s an important link to the DRAG-U-LA story as South End was originally started in 1956 by Dick Dean, who was based in Michigan at the time. When Dean met Barris at the 1959 Detroit Autorama, Barris managed to convince Dean to move to LA and work at his shop. Dick Dean’s son Keith reopened South End Kustoms in 2005 after his father retired – with David purchasing the bubble top from Keith a couple of years ago.

For “racing” use only!

David scored a pair of 18-gauge steel coffins, which he shortened and widened to get the proportions just right

Zoomies styled as church organ pipes were fashioned by Beaudesert Exhausts. Praise be the loud!

One area David’s DRAG-U-LA differs from the original coffin-based dragster is in the powerplant department. Rather than the 289ci Ford V8 utilised by Korky, David sourced a crate 350 Chev from Rocket Industries. The untrained eye couldn’t tell the difference though, as the pair of custom air scoops are modelled off the original twin units and are near-perfect replicas. Also, hiding under them is a similar induction set-up of twin Holley 350cfm carburettors on an Edelbrock cross-ram intake manifold (the original DRAG-U-LA used an ultra-rare Mickey Thompson cross-ram intake).

Another difference to the original is the transmission with David choosing an auto instead of a four-speed manual, plus a Toyota Hilux diff over a nine-inch. While the original DRAG-U-LA also featured custom spider motifs on hubcaps, David chose to run proper drag style wires and period-perfect Radir wheels.

The cabin of David’s stunner is decked out with purple sides, vintage drag controls and a bank of Mooneyes gauges. And he just managed to get it to MotorEx 2015 after hearing 89-year-old George Barris would be attending.
“We were about 75 per cent along when we heard that George would be attending. Having him at MotorEx was the push we needed to get the car finished and to the event,” says David.

“I was totally stunned to win and so very surprised to hear George’s words about this car. Receiving the award is something I’ll always treasure.”

Vintage Mooneyes gauges sit ahead of David, with cool pinstriping by Vick Pattison who also painted the tombstone by hand using bird feathers!

For that incredible finish, Dave relied on the experts at House of Kolor. With the body (coffin) fashioned from various materials including metal panels and resin accents, HOK recommended KD3000 primer, as it’s great for laying down a solid foundation over a variety of substrates. For the dazzling finale, HOK combined UK12 Pagan Gold Kandy over a base of BC12 Zenith Gold to take DRAG-U-LA’s original gold colour scheme to the next level. The result is absolutely killer! 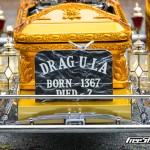